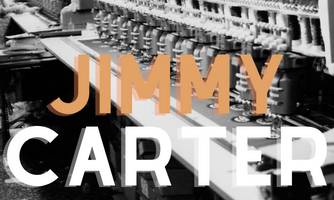 Sept. 1980 President Carter visited Tacoma, Wa. He was greeted by every notable democrat in the state. This was a planned visit and drew a very excited crowd.

The president first landed at McChord AFB and then motorcaded to give a stump speech at the Continental Grain terminal followed by a rally downtown Tacoma.

He was greeted by Phil Lelli Longshore 23 President who presented the president with a souvenir cap to commemorate his visit. This photo of President Carter in his cap wth Phil Lelli, Local 23 president who presented the cap to the president.
The cap was made by Northwest Embroidery (Northwest Custom Apparel) for the Longshore Local 23 Union to present to the president.

It was a short visit but everyone enjoyed seeing the president up close.